Aces Casino Blog "Blast From The Past:" When a Special Trip To Las Vegas Turned Into a $379 "Lesson In Civics." (Trust Me: It Didn't End Well.)

One of the many perks of working for a company like Aces Casino is the opportunity to be with your friends and family on most holidays, since the Orange County casino party leader traditionally doesn't have events on big holidays (except New Years' Eve).  This CAN be a blessing, but as some of the Aces Casino staff discovered, it can also be a "curse."

It's Labor Day weekend, 2010, a weekend that most sports fans just LOVE; The NFL and college football are starting their seasons, and Major League Baseball is heading into their stretch run.   It's a great time to be a fan, and an even GREATER time to be a sports bettor.  So many games on the big board, and so little time to place those wagers on our favorite selections.

That's the main reason that three staff members (myself included) decided to make that short run to "Sin City" late one Friday night, once another one of the Aces Casino star-studded Orange County casino night parties came to a close.  Normally, traffic to Vegas can be a pain, but we weren't leaving until Midnight, so we assumed that this would be a quick trip to Vegas, a trip made even quicker by, shall we say, "exceeding the speed limit."

THAT was "Bad Decision Number One."

Not long into the trip, a California Highway Patrol cruiser spotted us doing about 85 on I-15, somewhere around Riverside county.  THAT was "Bad Decision Number Two."  Soon, it was lights and siren, we pulled over, and a very hospitable officer wrote this reporter a ticket for the speeding, warned us to be a little more careful, and sent us on our way.

The stoppage really didn't hit us too hard as far as our schedule goes, so we were able to get back on the road, watch our speed, and make it to Vegas in time to get a room, grab 40 winks, get up the next morning, and spend three full days and nights betting games like crazy.  Did pretty good, too; hit three different parlays, cracked a few horse races, and hit the college and NFL games to the tune of a nine-win, two-loss result.  77% will always get it done.

Translation: We had a GREAT time..

We came home late that next Monday evening totally refreshed, and parted ways late that night boasting overall profits of about $600 each.  Then, when I returned home, I was reminded of the only glitch in our fun-filled weekend -- That speeding ticket that yours truly received during the trip to Las Vegas.

It all seemed so "trivial" at the time...

Agh.....OK, Gotta do this...I looked for and found the ticket, and since it was issued in Riverside County, California, that's the court that I'll have to attend.  So, I looked it up, found it and found out where it was, and three weeks later, on a Friday, I officially visited the Riverside County Courthouse to deal with my ticket.  The person I talked to on the phone to verify the court's locatiuon warned me to be on time...

Now, because of my employment at Aces Casino, the Orange County casino party kingpin, I tend to keep, shall we say, "late hours."  The events don't normally start until 7 or 8 O'Clock, aren't completed until past Midnight, and it takes a little time to properly dismantle the casino once the event is over.  Because of those loose facts, me being ANYWHERE by 7am, let alone Riverside, is a tough nut to crack.  But, I did the crime, gotta do the time.  Got up, and dragged myself out there, and brought a book with me (a trivia book), just in case there was some time to pass.

I get to the court, find the courtroom handling my speed-demonship, and when the doors open (at 7:20), I file in.

Anyway, we all sit down, and the bailiff comes out to talk to us.  He shows us the ropes, tells us how everything is going to go, but after about 5 minutes or so, he asks the group, "How many of you in this courtroom will need an interpreter when taking their turn with the judge?"

I kid you not.  99.99% of the hands were raised.  Only me, and what looked like five or six other people, DIDN'T raise their hands.  (Hey, if they don't speak English, how's they know to raise their hands?  Sorry, I digress....)  Upon seeing this, the bailiff tells us that this information is important to the court, because they need to know how long to keep the court's bilingual interpreter.  He then looks over at this man sitting at a table, and nods to him.

Then, it dawns on me.  They're going to take all the hispanic English-Challenged citizens first......Oh, my gosh....I look at my watch, it's now about 7:50AM, and the bailiff tells us, "OK, court will be in session in about 30 minutes."  Why?  He needs to process all these people first, I'm told.

GREEEEEAT.  This won't even START until around 8:30am, and I'm instantly looking like I'm at the back of the line, because I'm NOT in need of an interpreter.  I immediately jump up out of my seat, go out to my car, and grab my trivia book.  It's going to be a long, day, I can just feel it. 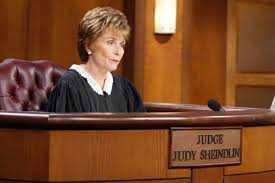 I'm beginning to get the feeling I'm not doing well..

That's the only thing I got right all day.  At 8:30am, the judge shows up, and he has the Bailiff call the first name.  "Jose Garcia."  Yep, we have a winner.  He walks up, can't speak english, pleads his case, and gets some sort of fine.  I'd tell you what it was, but the damned courthouse proceedings are all in Spanish.  I'm looking for the "Subtitles" button on my invisible remote.  Nope, no dice.  I'm stuck.  The judge is speakin' english, but I can't tell you the answers that he's gettin'.


What transpires in the next four hours is one Spanish-speaking scofflaw after another, all needing the interpreter, all doing basically the same thing, and seemingly getting the same fine.  12:30 finally arrives.  LUNCH.  ANOTHER half-hour lost.  I'm not CLOSE to escaping this Night-Mare-O.  I don't know why they have a lunch break.  There's nowhere to eat, OR sit down.  They kick you out of the courtroom during lunch.

I'm hot as a $2 pistol by now.  My entire day has been shot watching this Spanish "Soap Opera," and the last of the interpreter-clients doesn't step up until 3:35.  I'm frustrated, tired, and so hungry, I'm considering eating some of the trivia book by now.

Of the eight remaining people, I end up being NEXT TO LAST.  4:10pm.  I've been here NINE HOURS, and by now, I'm blaming everyone for this, including the three guys I went to Vegas with, the CHP, the Border Patrol, you name it.  I've read the book I brought TWICE by the time I finally get up in front of the judge.

I can tell he's not happy about my lil' outburst.  He starts going on this diatribe about speeders on California's freeway, and how much of a danger we are to the road, especially at night.  I'm looking at my watch as the diatribe goes on, and he tells me what this is going to cost me -- $175.00.  Now, I'm even MORE ticked at what's going on in the courtroom, and think back to that fateful night, when it looked to me like everyone ELSE on the I-15 that night was going about the same speed.....

It looks like he's finally done with me, after blaming me for everything from the uptick in traffic deaths in California to the Rams moving out of California...And that's when he asks me that fateful question.....

Boy, I wish he wouldn't have put it that way.  I'm so frustrated at this crazy day, that for some stupid reason, I thought of the book I brought with me.  "Yeah, I have a question," I responded to him.  "What major league baseball player hit a home run in his first major league at-bat, then never hit another in his long and storied baseball career, spanning over 20 years?"

I noticed the Bailiff and the court reporter WERE conversing with each other, but stopped talking when they heard what came out of my mouth.  They both looked at me, then looked at the judge, then looked at each other again, and it seemed like time had stopped on planet Earth.  Even the Spanish-speaking throng were quiet.  (I knew they could speak English.)  This hush over the courtroom lasted for quite awhile, until the judge spoke again......

"The answer to your question is Hoyt Wilhelm, Mister Aces, and, on top of your previous fine, that answer by this court will cost you a contempt-of-court citation.  Pay the bailiff on your way out."

Oh-my-GAWD.  Yep, that's the answer.  I can't believe I just did that.  The bailiff just starts laughing out loud, and the court reporter got a big kick out of it, too.  I shuffled over to the Bailiff's desk, where he asked me, "Is that the right answer?"

I guess it could have been worse.  It could have been Judge Judy.  From this day on, I've ALWAYS driven under 65 MPH when going thru Riverside, watch every reality-show small-claims court TV episode waiting for someone else to do something stupid.  (And they do...)  That always makes me feel better.

Every time I hear Wilhelm's name I twitch, and reach for my wallet.

THAT was Bad decision number FOUR.  Just goes to show you, I'm much better blogging about Aces Casino, and am so glad the base of operations of the company isn't in Riverside County.  Yep, we do our Orange County casino party stuff right here in Whittier and Buena Park, thank you very much.

So much for my getting a job as a game show host or a stand-up comedian.  I still can't believe I did that inside that courtroom, but with every tough lesson learned, there's always a moral to the story -- When in doubt, pitch around the judge.  He can HIT.