The Aces Casino Blog: Nothing Gets Us More Fired Up Than Getting "Cheated" At Certain Games - Or, In This Case, The Neighborhood Skill Crane Game

(Ed. Note: We're going to do this first part quickly, and quietly -- We sincerely apologize for the two-month vacation that our blog team took from their appointed rounds.  Rest assured that all of our blog team are alive and well.  Well, PHYSICALLY well... You know what we mean.)

Here at the Whittier offices of Aces Casino Entertainment (well-known as the top Orange County casino party company on the west coast), we've always welcomed suggestions from the masses that follow our irreverent blog that concern what we call the "Judge Judy-isms" of the gaming industry.

Simply put, we HATE it when people feel that they've been cheated when playing games.

Sure, we've documented various attempts by the casinos of this great world we live in to relieve us of our hard-earned dough by nefarious methods.  But, believe me, THIS Orange County casino night organization doesn't stop at righting the wrongs of those cheatin' gamblin' halls.  We've recently found out first-hand that there is ANOTHER nefarious scheme to pick the pockets of those of us that have, shall we say, some "disposable income" saved for our gaming habits.

That's why it HURTS us to bring this new situation to light here on our blog, but right is right.

Oh, my gosh... SAY NOT SO.  Now, I know what you're thinking -- "How can you be so naive to NOT know that skill cranes have a built-in bias against the player?"  Hey, sue me.  Yes, I know that is seemed more likely than not that every skill crane that I'VE sunk a dollar or two into appeared to have a severe case of "Crane Arthritis," and couldn't pick up a piece of candy without struggling mightily, but THIS?

I can't believe it.  Skill cranes are the "slot machine" of the arcade industry.

I was just perusing the web the other day, when a headline located on an interesting web site called vox.com caught my eye -- "Skill Cranes Are Rigged."  Yeah, I know.  Anti-grab-itis, I've seen it.  But no, THAT'S not the WORST part.  The damned things are SET to fleece me.  What I assumed was just random bad clutching play that beset every machine I had ever seen was just scratching the surface.

Here's a snippet from vox.com's article on the matter...... "The machine's owner can fine-tune the strength of the claw beforehand so that it only has a strong grip a fraction of the time that people play.  The owner can manually adjust the "dropping skill," as well. That means that on a given number of tries, the claw will drop a prize that it's grabbed before it delivers it to you.  The machines also allow the owner to select a desired level of profit and then automatically adjust the claw strength to make sure that players are only winning a limited number of times."

Come to find out, this information is actually publicly available information, pulled straight from the instruction guides for the biggest claw games out there. Open the manual for Black Tie Toys' Advanced Crane Machine. Look at page eight, section subheading "Claw Strength":

Here's the Cliff's Notes explanation -- The machines can automatically adjust the "coil power," or the percentage of electrical power that goes into the claw in every attempt at pulling out a prize.  And not only THAT, but the machine ALSO can regulate how many times that the claw will pull what I call a "Los Angeles Angels of Anaheim fielding error," or specifically, how many times the damned claw will DROP the prize, before it gets to the prize drop zone.

Now, after taking THIS information into account, it's not a gigantic reach to assume that the makers of these "one-clawed bandits" have already figured out the probabilities and subsequent odds for these unmasked bandits.  Check out the table below... 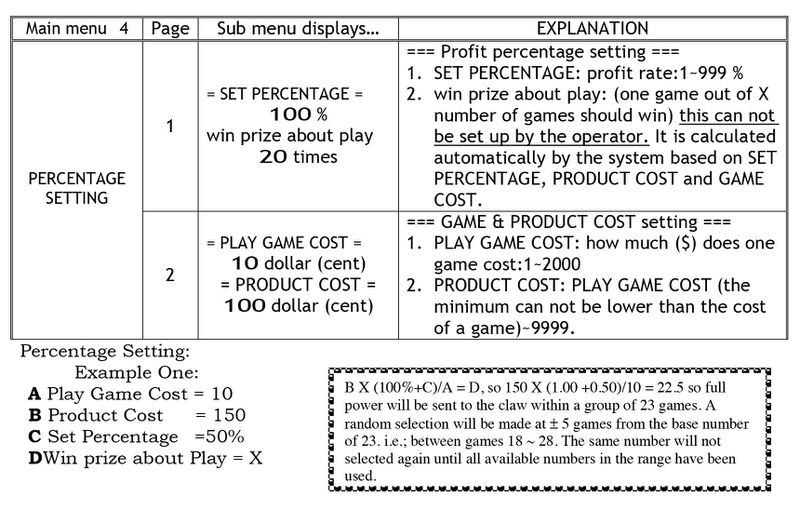 Exhibit B -- Frank Rosenthal would be proud.

Yep.  It's true.  The proprietor can also make these adjustments with a simple test thru the machines' digital display on the front of the device.

Exhibit C -- Yeah, we pretty much have NO chance.

There you have it.  Naivete, be gone with you.  You know, I KNEW that something was not on the up-and-up when I was playing a skill crane over at the AMC Theaters at Downtown Disney.  I took my wife and two small children to go see a film last week ("Cinderella," which should now be known as the gold standard in the telling of that story) and happened across one of these robbery machines that was giving out Olaf dolls.  Now, I tell ya, who WOULDN'T want an Olaf doll?  Well, wifey wanted one, so, here I go, remembering my history with these machines.   I may know the Orange County casino party biz, but Skill Cranes have been my Achilles' heel.

My history, you ask?  Something like oh-for-150.  Never one winner in a skill crane, unless you count the candy machine over at Camelot, that guarantees you a win.  It keeps trying until you get a piece of candy.  True story -- I got a piece of candy on my 26th CHANCE.  THAT'S how bad I am with the "crane."

So, $1 into the machine, and I move the crane over to an Olaf.... Down the crane goes, and actually GRABS the Olaf!  It picks it up off the ground, and Olaf is getting ready to move toward the prize drop....When suddenly, and with the impact of what looked like a 6.0 earthquake, the crane fumbled the toy.  Olaf dropped to the floor of the crane, and the Angels' Error Curse lived to see another day.

$6 more was put into the machine, but it was too late.  "Crane Arthritis" had set in, and the die was cast.  Olaf was NOT coming to this bloggers' domicile, and I would again be relegated to sleeping on the couch.  Seven dollars of disposable income had been spent, with nothing to show for it.

It's good to be back, my friends.  Our thanks to everyone at Aces Casino Entertainment for all their kind words and for welcoming us back.  We're back on the job at the best Orange County casino night party company in the biz.  We'll see you on Thursday with a look back at some of our favorite casino-based subjects.  See you then!