The Aces Casino Blog: The First Of August Means Just One Thing Around Here -- Time For Another Aces Casino "Blog-A-Thon." (Gee, That's GREAT.)

August.  The month that means the vacation is over.  Back to work.

Ahhh, but It's SO good to actually be back here and situated at the Blogger desk of Aces Casino, the Orange County casino night party leader.  When you've been dubbed the official "propaganda minister" of the company, you MUST be in the right place.

And believe me -- During the month of August, there's no place we'd rather be.  Why, you ask?  Simple.  For you see, August is the one month out of the year where we publish one blog entry EVERY DAY.  (Ed. Note: The best idea I've had in the company's history.  Now get to work and make it happen, Blog-Boy.)

Translation: Someone opened their big mouth around these offices and said that we could do 31 straight days of blog articles, and BOOM - It's now the "Law of Aces Casino."  Consider this year #2 of the chase for the most useless info in the month of August.

Hey, we're the top orange county casino party on the west coast.  Ain't nothin' we can't do.  ESPECIALLY when it comes to goofy, useless blog posts.

And, as the official liaison to the Aces Casino Entertainment "Department of Useless Information," we thought that it might be time to remind our throng of some 14 subscribers of some seemingly little-known facts when it comes to the art of casino gaming.

OK, actually, the boss suggested the topic for today's entry.  Everybody's a Blog critic.  But, it IS a pretty good idea, and yours truly has never shied away from stealing someone else's good idea, so, let's do it.  Courtesy of the Orange County casino party leaders, here is Aces Casino's "Top 3 Things We've Known For a LONG time, That Others Never Seem to Figure Out."

I thought THIS one was a gimme, but, apparently not, if you go by the countless numbers of players that consistently skip the chance to place this bet behind their original "pass line" bet.  In 2010, the Aces Casino Blog touched on how to begin playing the game of Craps in this link, and followed up with Part Two of the series with THIS link, but didn't mention the "Odds Bet."  That's coming in Part 3 of the Craps saga, coming soon to a Blog near you.

We're ALWAYS teaching players to place the "Odds Bet," a bet that has no actual decal on the Craps layout to show it's there, but take our word for it - It's there.  Placing your Odds Bet right behind your Pass Line bet on the layout is the right place to put it.

It ends up looking like two bets, one right behind the other, and it's the best bet on the Craps table, by FAR.  Why?  Well, I'll tell you; It's the only bet on the entire table that the house has NO MATHEMATICAL ADVANTAGE over the player.

The odds against the six or eight coming up on the dice are 6/5 against; against the five and nine?  3/2.  Against the four and ten?  2/1.   ANY time you get a chance to place an odds bet, TAKE IT.  The house has no advantage.  That's a good thing.

Say that you placed a $5 pass line bet, and the point came up four.  Then, you placed a $10 "odds bet" behind your pass line bet.  (That's called taking 'double odds,' or placing twice your original bet on the table for the odds bet.)  Should a four come up before a seven, you'd win $5 for the pass line bet, PLUS $20 for the ODDS bet (2/1 odds against the four).

I know, it sounds complicated.  You'll get it after about 30 minutes of play on a Craps table.  ome to an Aces Casino party.  We'll teach you.  We're not the Orange County casino party leaders for nuthin'.  Plus, when your company motto is "this beats working," well, you LOVE putting on casino parties.  Trust me.  (grin)  Bottom line: TAKE the ODDS BET.  We promise, it's the best bet at the table.  We're changing America's mind on this, one player at a time.

We just saw this at a table at last weekend's Rancho Niguel Little League gala over at the Aliso Viejo Golf Course.  I must have seen players avoiding the splitting of two aces time and time again.  Here is a great Blackjack trainer when it comes to practicing your skill at "21," but the linked web site from our friends over at the Wizard of Odds ALSO has GREAT techniques at teaching the strategy behind the games.
Bottom line: Take advantage of this GREAT web site, and take advantage of the ability to split Aces at the table when you play Blackjack for keeps.  Check out the "Wiz." Look it up, splitting Aces is the play.

#1 -- Soldiers, tanks and planes have NEVER had ANY effect against Godzilla

Yeah, I know, this doesn't have much to do with casino gaming, but as far as I'M concerned, this is THE number one thing that we've known for a while now, that the Japanese army seems to constantly ignore, time after time.

The Toho Film Company has made some 28 Godzilla films since 1954... We were watching one called "Godzilla, Tokyo S.O.S," which came out some 5 years ago.  (Ed. Note: the film came out in 2003.)  We watched this film after one of the Aces Casino events last week, a film that is something like #26 in the series.  (And YOU thought "Rocky" made too many movies.)

Yep, it's the tried and true format; Godzilla comes poppin' out of the Sea Of Japan, and who's on shore waiting for him?  That's right; It's none other than the Japanese army, armed with all kinds of guns, tanks, fighter jets, and even some magic-wand-looking laser-thingy's that shoot lightning bolts at out favorite 20-story buddy. 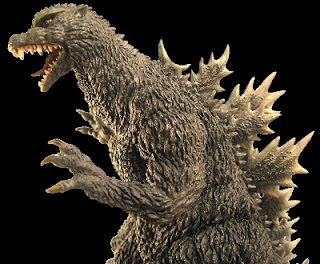 Does THIS guy look like planes, guns and tanks bother him?

Yep.  I kid you not.  The Japanese army is out on the front lines, AGAIN.  Twenty-Five times, they've come face-to-face with Godzilla, and twenty-five times, Godzilla has mopped the floor with them.  It's like the Harlem Globetrotters against the Washington Generals, only the Globetrotters shoot three-pointers at their opponent, instead of a nuclear blast that incinerates whatever it touches.
After 25 consecutive butt-kickings, you'd think that SOMEBODY in the Japanese Government would figure out by now that those soldiers and their lil' toys ain't gettin' the job done against Godzilla.

Heck, in ONE movie, I saw the Japanese built a Godzilla-like robot, to pull a WWE - type thing on Godzilla.  Didn't work, he just ripped the robot's head off, and rolled it down the alley for a strike.
Bottom line: Take it from Aces Casino, the Los Angeles County casino party leader.  After 28 movies, you guys have to get the hint.  No more tanks, guns, and planes.  THey don't work, trust me.  Hey - We've got some "Raid Pest-Be-Gone" somewhere in the back offices that looks like it kills ANYTHING we spray it on.  We'll come out and spray him, if you want us to.  That oughta do the trick.
And, if it doesn't?  Someone go find that flying turtle with the flames coming out of his feetie-holes that I saw in a movie last year.  He's probably not doing anything, and he'll probably let you pay him in lettuce.

That's all.  August issue #1 is done.  Back tomorrow, with another scintillatingly irrelevant post.  Hasta manana!
Posted by Aces Casino at 12:30 AM