Here at Aces Casino, the company widely recognized as the top orange county casino party company in southern California, we tend to get a lot of inquisitive clients that ask a LOT of GREAT questions concerning the casino party industry in general, and certain casino-based games in particular.  Heck, where do you think we get most of our material for our informatively irreverent Aces Casino Blog?  (We love our clients!)

We told you about our Aces Casino team having an event out at the campus of the University of Southern California (U.S.C., for short), where we ran into some very intelligent and VERY inquisitive students from the fraternity of Lambda Chi Alpha. Curiosity and intelligence run rampant here as well at the orange county casino night leaders known as Aces Casino, so the inquiries from USC got us thinking -- Maybe it's time to share some information as to just where some of our favorite casino games came to be.  POOF!  Blog article!

So, courtesy of the top orange county casino party company in SoCal, here are some amazing, amusing and confusing historical facts about another one of the Aces Casino Entertainment "Big Three" games supplied by our company on a regular basis -- Roulette!

The History of ROULETTE - The Aces Casino Way

Roly-poly is described in the roulette history and is precursor of the roulette games of today. Even Odd was considered as the simplest version of the online casino Australia roly-poly game. Modern roulette wheels were available in the casinos of Paris about 50 years later. It generally consisted of colors black and red, even and odd number bets, the numbers from 1-36, 00 and 0. The rules regarding the game are depicted in roulette history and it tells the fact that 0 stands for red and 00 stands for black.  Umm, not HERE, they don't.  I'm guessing VEGAS came up with THAT.  Probably Kenny Uston, but don't hold me to that. 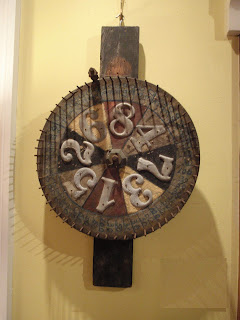 
One last thing about Roulette - We drove ourselves CRAZY trying out numerous mathematical theories on the game, to no avail.  We finally settled on letting an orangutan throw our chips onto the Roulette layout, sort of a "hit-and-run" method.  That worked just about as well as anything else.  Fun game, but it just doesn't like me.   OK, That's all for now...We'll take a look at another of our "Big Three faves" next time, when the top Orange County casino party company in the southland (and King of the parakeet papers) brings you Part 3 of our "History Of" series -- Blackjack!  See you then!
Posted by Aces Casino at 12:30 AM