Aces Casino Blog: When They Name a Horse Race After You, You KNOW Something's Gonna Happen

It started with an unassuming phone call from the brass over at Hollywood Park Race Track, long known for displaying a lot of my torn-up tickets from the past.  Their catering division was looking for some group discounts on some future events at their facility, discounts that were so huge that they were told by the powers that be here at Aces Casino that "the only way we could contract for events that low was to have the track name a race after us."

We were soon notified at our main offices that, yes, in fact, this was something that was already in the works, and scheduled for the 6th race of the last day of the meet, on Sunday, December 18, 2012.  Yep - The 6th race on that date was officially "The Aces Casino Invitational,"  and Hollywood Park Race Track would pull out ALL the stops to make this day a true event.  They told us that they had free admissions for our team of crazies,  reservations for ALL of us in their upscale Turf Club seating, and even lunch right before the race.  And, for the piece-de-resistance, all of us were invited down to the winners circle to have our picture taken with the winning horse and jockey after the race! 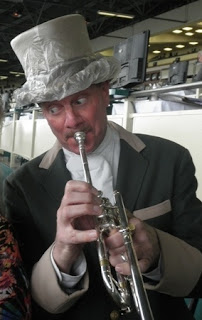 So, it's still raining pretty hard as Cavallo comes back into view, and heads towards us in the winners' circle.  The track liaison helps us get into position, and before we do that, I snap another candid picture.  Oh, by the way, Rafael Bejarano was the runaway winner of the leading jockey's award for the session by a mile )and an eighth).   Class guy, took a few more pics with us before he had to go and get ready for the 7th race. 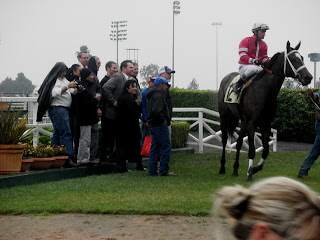 We'll get back on our twice-weekly blog-a-thon writing, we promise.  Oh, and remember - Anyone in need of top-flight casino entertainment services for their next party, corporate event or fundraiser need look no further than the top orange county casino party company - Aces Casino!  And with that, we'll be back here on Friday with our usual drivel -- This time, it'll be our blog entry on "3 places that you may not know exist in Las Vegas, but you HAVE to visit the next time you're there."   Sound good?  Thought so!  We'll see you on Friday!