As long-time Aces Blog readers already know, the staff here at Aces Casino are not just the reason that our company is the top Orange County casino party company in SoCal -- They're also the best at wasting time on Mondays here in the Aces offices.  So, when the topic of discussion came up in the hallways concerning "what the next scintillating topic" would make it's appearance on the ol' Blog on Thursday, it turned out to be a no-brainer.

You see, besides all the other accolades heaped upon our bright-eyed Orange County casino night team, we here at Aces Casino are ALSO known for our intense trivia contests.  (Ed. Note: Show up an hour early for an event out with our friends at K. Hovnanian Homebuilders someday, and you'll find this lil' ditty is WAY true.)  So, it made mucho sense to begin to share this inter-office "trivia game" with the blog-readers of the outside world, starting with this very blog-effort.

Ladies and gentleman, we present to you the latest in the Aces Casino Blog "Recurring Theme" series -- It's time for the Aces Casino Entertainment Tough Trivia Game!  We'll do this as much as possible, so send us the titles of your favorite films, and we'll do the "Tough Trivia" thing any time we get five good questions from our Aces Casino team.

We'll give out five questions, and they  can  be fairly challenging at times....  Here come the questions in "Jaws Tough Trivia."  The answers will appear on Monday.  Ready?  I hope so..

#1 -- Well, we'll start out with a softie.  We know Murray Hamilton was GREAT as the Mayor of Amity Island.....What was his character's name in the film?

#2 -- OK...Not bad .... Remember when the Brody kid has to go to the hospital after his "brush" with death in the pond?  Well, he asked for a specific flavor of ice cream.  That flavor he requested was..... ???  (Extra credit for the players that remember that one other thing that he asked his mom to bring to the hospital.)

#4 -- Name all of the people that die in the film of shark attacks.  Careful -- Don't forget one! 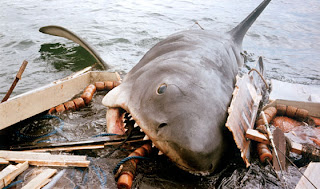 And #5  (My favorite Jaws trivia question ever) --  Hooper and Brody decide (after a nip or two at the Chief's house one night) to go down to the dock and cut open that tiger shark that was caught earlier in the day that was suspected of killing that Kintner boy.  Hooper does the honors, and, in his search of the contents of the shark's digestive system, he pulls out, among other things, a license plate.  What U.S. state is that license plate from?

Well, that's it for our first venture into our "Tough Trivia" blog game.  We'll see you all on Monday.  Thanks again to Aces Casino, the top Orange County casino night party company for giving us this soapbox to goof off in.  See you next week!