Aces Casino Blog: How to Explain that Our Favorite Part of The Universal Studios' Tour Is "Bates Motel"

It seems that when you work for Aces Casino, one of the greatest orange county casino party companies in SoCal, you tend to be tough to impress.  You see, when you WORK in the field of entertainment, and you're VERY good at what you do, your threshold of what entertains you tends to be very difficult to find.

Enter Universal Studios Hollywood.  OK, OK, we admit it.  We're big saps.  We love "touristy" Hollywood stuff.  We don't know why this is, but this place always does the trick for the Aces Casino team.  So, when the Fourth of July holiday rolled around and our crazy casino party crew wanted to go out and see some sort of "show" together, we picked "The House that Jaws Built," none other than Universal Studios.

We left the facilities VERY early in the morning to try to get out there by the time the park opened, so we could do it up right and not have to wait in line for too long to be able to take in all of the parts of the park we wanted to see.  (Traffic was light, that was nice.)

So... We suppose that It's time to give our awards for our field trip to Universal Studios Hollywood, and list our top 5 favorite things that we saw on our July 4th visit.....

If for nothing more than that 90-foot drop into the water below, this ride may have fallen off the Aces Casino charts.  It's fun, if not a little dated.  Some of the attraction wasn't even operating correctly (Dinosaur head our of water with mechanism showing, plastic bag over where a T-Rex is supposed to be right before you drop into the drink), but it was hot, and we needed that cool-off at the end of the ride. 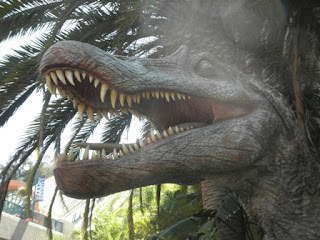 The star of JP3 was in fine form.

Talk about DATED.  Whew.... This "Amity Island comes to Life" area where the shark attacks take place is in need of a tune-up.  The fake attack in the harbor looks dopey, and even the park employee hosting the tour didn't even acknowledge the shark when he popped out of the water next to the tram.  I didn't think THIS exhibit would make our top 5 list, until yours truly almost fell out of the tram trying to get a picture of "Bruce, the Shark."  Whew... Probably the closest call the park has ever seen.  I didn't know sharks could do wheelies. 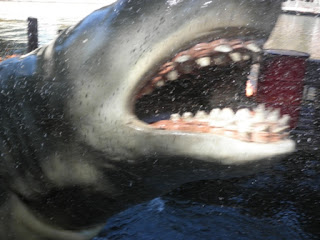 Yes, it was THAT close.  He almost ate my camera.

This turned out to be a great lil' show.  Funny stuff early, and a nice little 3-D show at the end, with live action actors playing John Connor and the ex-Governor himself.  Suggestion -- Sit up front, like we did.  The action and actors come right up to you, but look out for the fog machines.  They got us.  3 stars on this one.

Wow...THIS was INCREDIBLE.  The first thing I liked about this new attraction at Universal Studios was, even though you have to wait 30 minutes or more to get ON this thing, the entire wait for the ride is INSIDE the building.  No sunstroke here, my friends.  It seems like the wait is very quick, because there is so much to see while you're waiting and walking towards the loading platform.  I won't ruin it for the readers, no spoilers here. FANTASTIC 3-D effects, well worth any wait to get on this ride.  Experience it, it's worth it.  But there's a reason that this didn't make #1 on our list, which ended up being......

I know, I know...There's a good reason.  I call it the element of surprise.  The tram we were on comes rolling thru this mock-up of the old Bates Motel from the 1960 movie, "Psycho."  The tram stops in front for a moment, and the tour guide starts talking about the classic Hitchcock thriller, when we spot this guy coming out of the motel facade, and putting something in the trunk of a car sitting in front of the set.

I thought it was a glitch, just some stage hand putting something in his car, to transport to somewhere else in the park, when the tour guide utters something like "that guy looks like Norman Bates."  Well, as soon as he says this, the guy next to the car pulls out this knife, and starts walking VERY quickly towards our tram, and right towards US, as we're in the last car of the tram, AND on the side of the tram car that faces the motel.

This guy starts walking REALLY fast, right towards us!  The tram driver throws it in gear, but to me, it looks like it's too late.  he's REALLY close, I could reach out and almost TOUCH this guy, and here's the proof.... 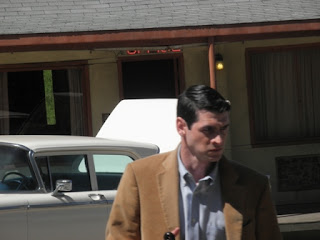 He's closer than the SHARK.  STEP on it, WILL YA?

He's looking right at the guy sitting behind me, but, as things worked out, the tram sped away before ol' Norman could get us.  Whew...(Laugh)  Universal should give that guy a job in front of the camera.  He had Me fooled.  Usually, my pictures that I take are ALWAYS horrible, because the subject I'm shooting is too far away to be able to tell who it is.  Thanks to Bruce and Norman, I'm suddenly a cameraman.

We had a great time out there... Our sincere thanks to all of the many people over at Universal Studios Hollywood that put on a great show for all of us.  They did a great job taking care of a bunch of orange county casino night crew members, and we won't forget it.  Call on Aces Casino any time, you movie-makers.  We'll try to entertain you like you did us.  Two things we insist on, though -- No sharks, and no knives.

That's all from Tinseltown.  We'll be back on Thursday with more from the "College of Casino Game Knowledge."  See you then!
Posted by Aces Casino at 1:00 AM