A hearty welcome to all of our "online students" that have returned for our next class on "the game of dice," also known as Part 4 of the "Aces Casino College of Casino Game Knowledge - Craps 201."  (Dusts off soap opera announcer's voice) "Ahem..." As you recall from our prior excursions into the wild and wonderful game of Craps, we informed our students of the one bet on the Craps layout (and quite possibly the only wager of it's type in the casinos of this great land called Nevada) where the 'house' has no mathematical edge over the player - "The odds bet."  Simply stated, the odds bet is the best bet in the game, and should be fully utilized at the maximum level allowed by the casino per their house rules.

Oh, yes, and if , by chance, you neglected to attend any or all of our last three classes, fear not, my class-cutting wunderkinds -- You can go back and check out past lessons on Craps by searching for past issues of the "Aces Casino College of Casino Game Knowledge," which you can find at our Aces Casino Blog start page, and brought to you as an absolutely FREE service by the leader in Orange County casino party events, Aces Casino.  It's there, somewhere.  (Hey, YOU cut the classes, not me.  Go and look for them, you should read those old posts before reading this final edition, anyway.)

Today, in Part 4 of our lessons, we delve into "the exotic bets," wagers that appear in the center of the Craps layout, plays that are fairly easily explained, but for some, look like the written instructions on how to fly the space shuttle.  No prob, my friends -- That's why we're the top Orange County casino night company in SoCal.  We consider it our job to explain to players looking for help in how to approach the many seemingly unapproachable casino games out there in casino-land.  Important safety tip - Call Aces Casino when you're ready to try out some of the things that you've learned about Craps.  The dice don't know that the chips are fake, and there's nothing like "taking the wheel" and watching in person how the game flows, and becomes repetitive.

So...Exotic bets.  First off, let's put another layout image up for the masses to peruse....

No, not THAT image.  That's Elita Loresca, the KNBC-4 Los Angeles weather girl.  VERY nice image, but she doesn't have anything to do with the game of Craps.  (Ed. Note: At least, we don't THINK so.  It could happen!  We dare to dream here at Aces Casino.) 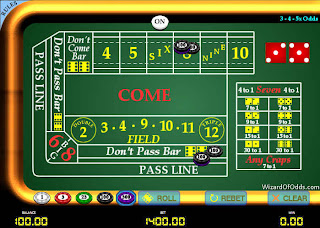 60% view of a Craps layout.  Small steps, my students.

THAT'S the one we're looking for.  (Ed. Note: Speak for yourself.  We like the OTHER image, Craps-Boy.)  This image shows the partial center of a regulation Craps table layout.  We're going to discuss the artwork that you see on the right side of the image.  Do you see those pictures of the dice in this image?  Those are called the "Hardway Bets," wagers that players can make to get "more action" at the tables, and take a chance at throwing what most people might call "doubles."  Place a bet on any of these, like the "hard four" (a 2 and a 2 on the dice roll), and you win if a random roll of the dice comes up exactly as pictured.  But, you LOSE, if the dice show a 3 and a 1, the "easy" four, or if a seven is rolled.

Mathematics behind this example -- Odds on these bets range from 9% to 11% against the player, making these wagers fun and exciting, but not very profitable in the long run.  That's why we call these plays "the Aces Casino College Fund."  Invariably, these chips end up in the virtual "college fund," or quite profitable in the fake-chip world of the game.

Exotic bets - They're the ones on the right side, too small to read.


Now, let's move to the the other possible exotic bet plays.  Now, THESE bets are what we call "one-roll propositions," meaning these bets either win or lose on the next shot of the dice, no matter when the dice are thrown in any particular series of rolls.  The payouts ARE high on these one-roll props, as you can see, but the math behind these plays can be painful to the ol' bankroll - Odds on these bets range from 11% to 16% or higher against the player, meaning these plays boost the "college fund" even higher.  Play at your own risk.  Most casinos will allow $1 bets on the props, so it might not hurt so much, and they CAN be fun - Just like riding mechanical bulls in the C/W honky-tonks.  Message -- Don't be surprised if these exotic bets "buck your chips off" of your bankroll.

Bottom line?  Take it from your favorite Orange County casino party company, Aces Casino -- The exotic bets can be fun, but if the casino loves to see you make these plays, you're giving up quite a bit in the math odds against you.  Stick to pass line bets with the extra "odds bet," and possibly the Come bet.  (Ed. Note: Speak for yourself.  I'd rather be stuck to Elita Loresca.)

What's that, you say?  We didn't discuss the "Come Bet?"  Well, that means you'd best return for Part 5 of the "Aces Casino College of Casino Game Knowledge," when we take an in-depth look at the play that appears right in the center of either end of the Craps layout, the "Come Bet."  It's our favorite play, and we'll explain why when we return to the "College" in about two weeks.  (Ed. Note: The Aces Casino Blog regarding the Come Bet will appear here on Thursday, March 15th, 2012.)  Until then, we'll see you at the next Aces Casino Entertainment "Casino Extravaganza!"