Even though Aces Casino is considered the finest Orange County casino party companies in southern California, our long-time clients ALSO consider our crew of crazies as being big fans of anything that fits the "Theater Of The Bizarre."

The only thing we need to list to prove this point is something we'll call Exhibit "A" -- While tuning in to the piped-in Netflix feed on Sunday evening, the Aces Casino crew was treated to a 1989 movie starring Kris Kristofferson and Cheryl Ladd (she's the reason we turned it on in the first place) called, "Millennium," a film about futuristic time travelers that spirit away airline passengers off of doomed flights and take them to a place that looks like the Indiana Jones ride at Disneyland.  Yeah, it was THAT bad.  And the longer the film went, the worse it got.  At the end, a supposedly-smart robot that was full of good advice decides not to save himself when the place blows up.  Note to self - When looking for advice, don't ask supposedly-smart robots.

Oh, did I mention the horrible special effects?

Boy, do we love McBarkers like this.  CLASSIC horrible movie, right up there with "Plan 9 From Outer Space" and Sandler's "Jack and Jill," it's THAT bad/good.  See what we mean?  "Theater Of The Bizarre."  Gotta have it.

So, thanks to the aforementioned "Millennium," the Aces crew started bringing up other things like the most bizarre tourist attractions in the United States, sort of a "Guinness Book of Records" - type discussion.  That's all it takes to come up with still another goofy idea for an Aces Casino Blog entry, my friends.  (Hey, Sunday evening is always slow, and we were winding down from another busy Saturday night of events.  We needed the break.)

And so, with that "inspired logic," and also a tip of the cap to the all-powerful internet and Kris Kristofferson's bland portrayal of the dumbest NTSB director in the USA, The Aces Casino "Theater Of The Bizarre Repertoire" proudly presents our "Top 5 Goofiest World Records and Tourist Attractions in the United States," in reverse order.

The first thing that struck me about this lil' ditty was the fact that this world's largest snowflake appeared more than 125 YEARS AGO.  What, you mean to tell me that in the last 125 years, with all this crap about global warming supposedly creating these nuclear winters, that we haven't been able to come up with one stinking snowflake that could beat that 1887 feat?  And who in their right mind back then saw this Flake-a-saurus, and thought to go get the tape measure?  Did they even HAVE tape measures back then?  Sorry, no pics of this phenomenon, but Google Doodle did a mock-up of it last week.  Oh, well, better luck next year.

#4 -- The Biggest Bottle of Catsup

This suggestion started a war over here at Aces Casino as to what was better on french fries -- Ketchup or ranch dressing?  (Don't ask, the argument finally stopped ten minutes ago.)  But, since we couldn't find the biggest bottle of Ranch, we're goin' with the catsup.  (That's what THEY call it.  Sue me.)

Somebody get Paul Bunyan on the phone.

There it is, my friends.  170 feet tall.  Here's the link to the story behind this big ol' bottle, but my favorite part of the story was where the writer had to divulge the fact that this wasn't really a "catsup" bottle -- It's a water tank.  Geee, thanks.  I would have never known.  And what's the difference between Ketchup and Catsup?  IS there?  (Ed. Note: Great, here come the e-mails.  Geeeee, thanks for THAT, too.)


This one hit home for us.  When you're the best Orange County Casino Night party company in the biz, lighting is important.  So, check out this 13-foot tall beauty from Edison, N.J. right here.  Can't tell from the pic if it's one of those bizarre, curly-cue-looking bulbs that we hate.  Even Shaquille O'Neal would have to bring a ladder to change THAT baby.

Those of us that drive down the 15 freeway to partake in the yearly pilgrimage to Las Vegas from Orange County, CA., have undoubtedly seen this rectal temperature-taking nightmare out in Baker, Ca.  The last time that we tooled thru that hotbed of heat last summer, we noticed that the thermometer wasn't working.  The building associated with this big-time tourist attraction had no tenant.  We'll catch up with this story later in a subsequent blog, I promise you.  We gotta get this thing working again.

Now, I don't know about YOU, but it seems that I hear about this big ball of string CONSTANTLY.  Boy, I wish that Aces Casino had this twine ball's press agent.  Oh, but hold on a minute -- It seems that the "inquiry" sign on the tote board is lit, when discussing this so-called world record.  You see, what the crack staff here found out is, there's controversy in this category....

It seems that the world record for the biggest ball of twine is currently held by a Godzilla-sized ball in Cawker City, Kansas, which is estimated to contain over 7 million feet of twine.  Now, THAT'S a big ball of twine, and yes, it IS the biggest in the world. 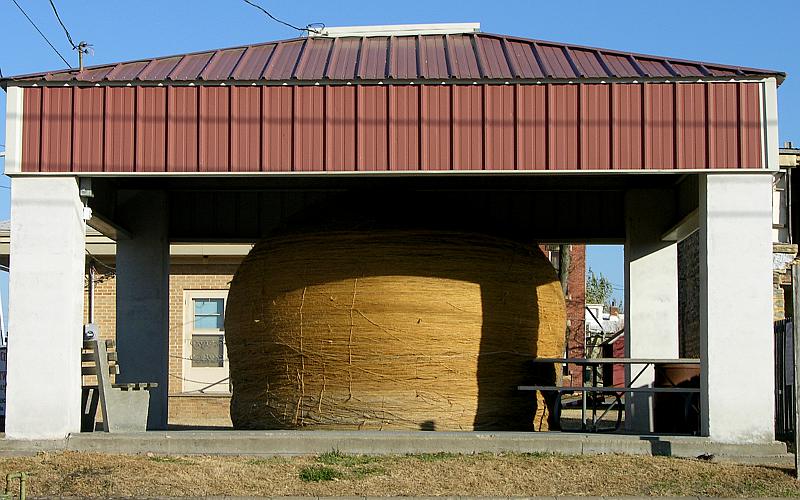 I love the most recent article that we could find on this spherical monster, which we'll list in a link right here.  Cawker City LOVES their mammoth creation, and fully celebrates it's existence all over town.  Paintings, souvenirs, even a "twine walk" that shows painted footprints that most likely lead to Twine-Zilla.  The best part of THAT saga is the hiring of city-based students to paint the footprints that apparently lead visitors all OVER the place.  Now, THAT'S my type of city pride.

In that same article linked above, the author mentions another huge ball of twine, that looks like IT, at one time, WAS the world record holder.  It's located in Darwin, Minnesota, and, as the story goes, was created by just ONE man, a gentleman named Francis Johnson, known here at our Orange County casino party offices as "the man that had more time on his hands than WE did."  Favorite quote: The lady that proudly announces that "We don't have much of a town left, but the twine ball really draws 'em in."  Damn, there goes her chance to be mayor.

Yep, there's the Minnesota Ball of Twine.  It's got it's own house.  They play for keeps in Minnesota.  Now, the problem that the Minnesota people seem to have with the Kansas ball of twine is that, A) the Kansas ball of twine was "built" and continues to be built by many different people, and not just one person, and B) it really isn't a "Ball" any more, as the people that are adding to the Kansas ball are just wrapping twine around the center of the ball, which is beginning to turn it into the "biggest ball of something that will look like the world's biggest cornbread muffin."  You can see the twine-adding spool in the picture, on the floor, right-of-center.  Oh, also,  kids are climbing on the Kansas ball and shifting the ball's shape a bit.  Darned kids.  No respect for twine balls, I tell ya.  Plus, it's starting to stink a bit?  OK, that's never good, and could be grounds for a DQ right there..

So, there you have it.  Darwin, Minnesota is crying foul about that Cawker City creation.  Well, there's only one way to settle this.  Aces Casino, A.K.A. the Orange County casino night party leaders, has got to visit these two fine cities and see what the townspeople have to say about all of this.  We're always up for a challenge - That, and we're also always up for an out-of-town casino party.  Someone tell the fine folks of Darwin and Cawker City that we'll get the sponsorship and bring the casino party if you contact us and invite us to this Twine-soiree.  Have the local officials in the various city hall offices of the towns get ahold of us.  I'll guarantee you that It's not the craziest thing we've ever done.  The submarine party has to be the winner of THAT designation.

THat's all for our goofy blog today... Hey, just a reminder -- Those of you that have been part of our "Aces Casino College of Casino Game Knowledge" series, Thursday's blog will feature Part 3 of the Craps seminar we've been posting.   Take care, have a good day, and we'll see you "in class" on Thursday!