Aces Casino Blog: Casino Party 101, A.K.A. "Which Tables Are Best To Have At My Next Casino Party?"

When it comes to finding out what the top Orange County casino party company known throughout the southland as Aces Casino does best, the answer would probably be something like, "we strive for excellence in the field of putting on elegant, professional casino events."  It's been widely known for some time that our little team of casino party pros at Aces Casino has access to literally EVERY casino-themed games that Las Vegas and the casino world has to offer.

Translation:  "If you've seen it in Vegas, Aces has it."

That's just one of the things that makes us a popular Orange County casino night company.  But, that's not the ONLY thing we do here.   Oh, no, there's MUCH more than just throwing the tables at the parties and getting out of the way.  For 18 years now, Aces Casino Entertainment has gone the extra mile with each and every client that brings us aboard to help them with their event, something that is so important to us.  And the reason that we DO all this pre-planning itinerary work is very simple.

Simply this -- Every casino night party is different.

That's right, my friends.  There might be some events that have basically the same configuration, but that's where the similarities usually end.  Clients have been coming to Aces Casino for almost two decades now, and putting on all kinds of events that fit our specific qualities; From Christmas parties to Grad nights, from birthday parties to employee networking events to Bar and Bat Mitzvahs,  every group is different, and every group has certain "favorite" games. 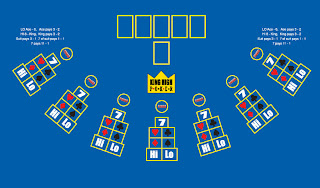 The new kid on the block, "King High Poker."

That's where we come in.  Aces Casino literally has EVERY exotic game in the industry.  Oh, sure, Aces has Blackjack, Craps, Roulette, Poker, all the staples on the casino gaming scene... But the company ALSO has games that some players may not have even HEARD of - Ultimate Texas Hold-'Em, 3-Card Poker, Caribbean Stud Poker, 3-Way Action, Pai Gow Poker (my fave), Let It Ride, even the Australian game known as King High Poker, a game that was just launched in 2011.  Seriously, whether the game is 6 months old or 100 years old, if you want a certain game at your next event, you'd best come to Aces Casino.  They know 'em all, and HAVE 'em all, believe me.

Now, for those of you that are planning an event in the next few days, weeks or months, and haven't quite settled on the games you'd like to have at your intimate in-home party, here are a few helpful tips that might assist your thought processes, when it comes to figuring out the best games for your guests to enjoy.... And, for this example, we'll assume a guest list of about 30-45 guests, give or take a few...

Blackjack - Yep, almost a gimme.  Gotta have at least one of these, maybe two, if you have the room.  Everybody either knows or would like to learn the game of Blackjack.  Rare is the time we won't see one of these at an Aces Casino event.

Craps -This is the game we call the "party machine."  It can be the most intimidating game on the casino floor, but in party mode, where you can take the time to teach the players the ins and outs of the game, and what all the betting spaces mean, it's the best game to have at just about ANY in-home event.  If you have room for a huge, 4' x 12' monstrosity in your game room at the event, bring one of these aboard.  You'll be glad you did.

Roulette - Ah, yes, the game that mathematicians and systems players have been trying to beat for years.  Bottom line - Aces Casino has the most beautiful Roulette tables in the industry, and they're all casino size and quality, just like the "big boys" in Vegas have.  It's about 4' x 7', so it's kind of big, but nothing screams "Orange County casino party" like a Roulette table.  Helpful hint - If your expected gathering is looking like it'll be 50/50, men and women, this table is one you should consider. 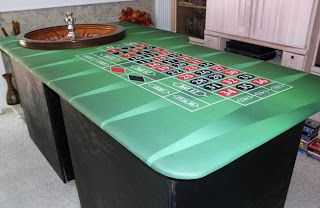 Poker - Now, on the other hand, if your group is going to be predominantly of the "male" persuasion, you'd best consider a poker table in place of the Roulette table.  That early-2000's poker boom created a huge market for these tables, and there are a lot of guys that would love to take on their buddies in a game of Texas Hold-'Em, especially when the chips are phony.  Helpful hint - Remember, you'll need at least 9 chairs for this game to operate properly at your party.  The Dealers have their own chair, don't worry about them.

Those are just a few of the countless number of suggestions that Aces Casino can make when discussing the various combinations of party tables to bring to your next event.  Hey, we're not known as the best Orange County casino night party company in SoCal for nuthin'.  Give us a call and try us on for size.  Our in-house "propaganda ministry" will be glad to answer any of your party questions.

Coming attractions in the next couple of weeks right here on the Aces Casino Blog is one of our favorite subjects - In-depth coverage of the 2012 Aces Casino company party, also known as the "Blackmail Hour."  People always used to say that someone at the company should be filming these soirees for posterity.  Well, now we DO, and we'll cover the latest Aces invasion the first chance we get, or whenever the camera cools off.  The actual date of the event is up in the air as this "goes to press," but when Aces hosts the party, we'll get the lowdown on the happenings, we promise.

There are also some interesting and timely subjects being addressed by the Aces Casino Blog staff in the next week or so.  Thursday, we'll chronicle the selections by the staff of the 3 craziest casino party events in Aces Casino history.  Then, next week, you can check out the team's irreverent look at nutty "world records" in the United States and abroad, as well as Part 3 of our in-depth discussion of the game of Craps in our "Aces Casino College of Casino Game Knowledge" series.  'Til then, have fun at your next event, and we'll see you on Thursday!