This is the time of year that the offices of Aces Casino, the Orange County casino party giant, just LOVES to see coming.....(That is, besides the beginning of another school year that'll get the kids out of our house for a while, so we can concentrate)....

That's right, friends.  Fantasy Football has GRIPPED the Aces Casino team once again - Time for the fur to fly at the annual Dunn-Edwards Fantasy Football League draft, with the date coming up some nine days from now.  We always wait until after the 3rd NFL pre-season game to draft, so we can all take a good look at who's finally signed, in camp, just got hurt, or whatever. Those of you that do the fantasy-thing know what we're talking about, and those who don't, well, I guess you stopped reading already.  Too bad - We might just re-post our link to "Chumlee On Toast."  When it comes to our kooky and eccentric staff here at the Orange county casino night kings, you just never know.  (Ed. Note: He's serious.  Someone should be filming OUR staff Christmas party.)

So, since we still have nine days to kill before we all get together and put together our teams for the 2011 DFFL season, we thought it was just the right time to discuss some of the more pertinent pre-season NFL topics that are floating around in the various fantasy football blog sites, topics revolving around certain players and teams.  So, without further hesitation, here are the Aces Casino "pre-season top 5 NFL Fantasy Football hot topics,"  courtesy of your favorite orange county casino party company-turned-fantasy football info station...

Boy, I bet things got pretty crazy over at the Titans' offices when they got word that "CJ2K" was asking for somewhere around $13M PER SEASON.....Then, when the numbers in regards to the Larry Fitzgerald contract with the Arizona Cardinals were released (8 Years / $120M, $50M guaranteed) ol' "CJ2K" has his agent contact Tennessee, and tell them they were looking for MORE than $13M / season.

Holy smokes....$13M per season...That's like getting TWO "Six Million Dollar Men" like Steve Austin, and still having $$$$ left over to afford parking at the 2012 Super bowl.  The Aces Fantasy Slant on this -- Chris Johnson will be signed right around the end of the 4th week of preseason games, and will be trotted out on the field on opening day, 2011.  Someone tell Ron Bolton that It's OK to breathe, now... (Grin)  I wouldn't let this guy drop down in the first round TOO far, and give some other team a bargain.

Shows how much I read in the off-season -- I didn't even know that Eli's older brother had HAD some sort of neck surgery.  Must've been a tough operation.... That guy's neck is like two feet long.  Peyton came out and said he might be ready for the start of the regular season, he's just waiting for the nerves to regenerate.  Aces Fantasy Slant -- I agree with Manning's former head coach, Tony Dungy - Unless Peyton's dead, he'll be out there on opening day.  Extra info nugget -- This has only happened to Peyton Manning one other time in his career (missing most, if not all of the pre-season).  When it DID happen, Manning was VERY ordinary for the first month of the season, but became his old self after week 5 or 6.  Don't downgrade him too far.

OK, this one's a toughie.  I love me some Antonio Gates, but his Plantar scares me.  Dallas Clark's a stud, and fully recovered from his devastating wrist injury, but his QB might be missing at the startt of the season.  We'll put Gates 1a, and Clark at 1b, for now.  IMHO, you can't go wrong with either one.  Watch out for how soon one or both of these guys might be drafted, but rest assured that there are some pretty good TE's all the way to the top SIX in this group, and probably better than six.... (Sleeper?  Jimmy Graham.) 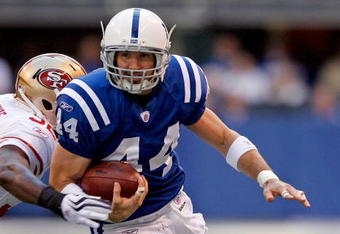 Manning LOVES this guy, and so do I.

In order.....1 - Bradshaw.  Quick as a cat, and we're not scared of the Jacobs thing.  2 - Blount.  Give yourself one fantasy point if you can name LeGarrette's backup.  3 - Hillis.  Ditto for Peyton, he's the man, and we're not scared of a slow-down at the end of 2011.  4 - DeAngelo.  Should be higher, but Johnathan Stewart's a problem.  5 - Moreno.  This hurts to put him at five, but with Willis "the Vulture" McGahee stealing goal-line carries, I just gotta do it.

That's all from the orange county casino party leaders for this very late Tuesday blog, my friends.  Friday, we'll be looking at another one of our Aces Casino "College of Casino Gaming Knowledge" quizzes.  Have a good week, stay cool, and we'll see you in two days!

Oh, and for those of you who hung in and finished our fake football ramblings, here you go, as promised.