The best news about being part of the team here at Aces Casino, the orange county casino party kingpins, HAS to be all of the fun things we get to do on a regular basis.  Someone actually nicknamed the company, "Pixar South," a tribute to the Disney's movie-making innovators up in Silicon Valley.  Anyone that has read about the camaraderie amongst the crew over at Pixar knows the deal over there, and they were the model for Aces Casino.

Yes, without question, Pixar IS a very special, unique place, but Aces Casino DOES have at least ONE thing in common with the Disney Animation Giant: New ideas, thoughts and opinions from our great crew are always welcome.  (That's how we became the top orange county casino night party company in the first place, but don't tell anyone.)  Whoops: looks like our secret is out, but enough of the shameless plugs.... (Not.)

So, when a request for suggestions on what might be a great off-beat topic for this week's Aces Casino Blog was requested, the "suggestion box" was chock-FULL of ideas; some interesting, some thought-provoking, and one that was just so out-there, we HAD to go with it.

It said, "Would you please settle a bet for us?  Which came first, the chicken or the egg?"

A GREAT question.  The decision was made, right there and then: This week's goofy Aces Casino Blog would be about the 3 biggest "Gee-Whiz" questions, things that make you go, Hmmm... -- Time to find out the answers to some age-old questions.  So, we'll start with the Aces Casino Blog winning suggestion..... 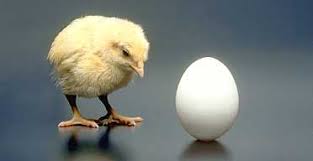 I have to admit -- THIS one has always had ME "Flummoxed."  (Let's see how the Microsoft 'spelling wizard' handles THAT word.)  And, sure enough, after about two minutes of Google-informed research, we thought we had the answer.  Researchers in Britain had proclaimed this long-bantered-about conundrum solved.

It was the chicken.

You KNEW it had to happen.  Some of those same British researchers started wondering about how pre-historic eggshells were formed back when I was in high school.... Something about protein, it's subsequent crystallization, how the shell is actually formed in the first place... I'm sure YOUR eyes were glazing over just READING this stuff.  Mine sure did; it was like biology class, all over again.

Bottom line?  Well, it appears that when it comes to the chicken or the egg coming in first, the "Inquiry" sign is still up on the tote board.  Please hold all tickets.  Those goofs in England have no idea which came first.  They can give an educated GUESS, but these are the same guys that thought the Spice Girls were bigger than the Beatles.  Case closed.  I'll take the egg, in some bizarre pre-historic "VelociChicken" love triangle thing.....

Which lawyer made THIS thing?

Don't ask who had a problem with this one, but rest assured, there is too much ro-sham-bo goin' on in our office to decide who's buying lunch that day....

OK, I'm sure everyone has heard of the ol' "Rock / Paper / Scissors" game, and has probably used this ancient version of the first "hand held game" in existence.  But there has always been something about this game that bothered me...

I gotta say, I'm takin' scissors every time in every rock / paper / scissors game from now on.  I'll be undefeated.  Someone get the think tank from MIT on this.  We're needin' a clarification on this.  Get back to me, ASAP, at this link.  Lunch is riding on this.

Obviously, the crew here at Aces Casino has too much free time on their hands.  That having been said, I'm STILL pickin' scissors.  Two conundrums down, and one to go.

"Are we EVER going to the playoffs again?"

This one doesn't say much for us men, in my humble opinion.  OK, so, if Man evolved from Apes, how stupid are the apes that are still roaming the earth?  You tellin' me they didn't get the memo?  Simply put, if men DID evolve from apes, why are there still apes?  And, sorry, Raider fans don't count in this theoretical discussion.  They haven't evolved yet, either.  See picture, above.

I think I saw an ape beating three Raider fans at checkers last week over at the zoo.  They were playing for smokes.  Don't ask.  It was ugly.  When Raider fans are involved, it usually IS ugly.  Trust me.  And don't ever invite those fans to your daughter's birthday party.  The spikes they wear always pop the kids' balloons.  Then, Crying usually ensues.  Oh, and it ain't the little kids that are crying.  It's the RAIDER fans that are doin' the bawling, Especially when the birthday girl brings up the Raider's record over the last ten years.  That REALLY brings on the water-works, But, I digress.... (grin)

Well, there you have it, my Aces Casino blog-reading friends -- If THAT hasn't totally muddied the water, I don't know what would.  Here's our pledge -- We promise to stick with what we know best (being the top orange county casino party company), and stay away from tough riddles, if you'll promise to call us, ask for a quote, and NOT mention "the Chicken or the Egg."

Uhh, no, we're fresh out of British researchers.  Just call tails, it never fails.
Posted by Aces Casino at 12:02 AM