Aces Casino and the WSOP: A Match Made In Heaven (Unless You're Facing Men The Master) 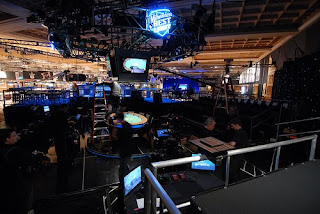 Great view, isn't it? Yes, that's the view from the top row of bleachers of the World Series of Poker final table set, on site at the Rio Hotel and Casino, Las Vegas, Nevada, courtesy of ESPN, circa 2009. Ahh, yes, the WSOP: Poker's "Super Bowl." And take it from Aces Casino, SoCal's top orange county casino party company -- If you've EVER thought of taking your own poker game skills to that next level and test that skill against the finest players in the world, friends, you HAVE to do it. You'll NEVER forget it. It is SO incredible..... Your memories will last a lifetime. But, if by chance you can't attend, the next best thing is definitely following the action on CardPlayer.com's "Poker News" section. CardPlayer covers it ALL, and has been doing so for as long as I can remember....

The WSOP (I'm not typing out that whole name any more, WSOP is what it is, anyway) is THE poker experience, and is still another perk that comes with working at Aces, who takes pride in having the number ONE orange county casino party crew in the business. Hey, if you want to stay on TOP in our industry, ya gotta do RESEARCH, don'cha? And what better place to gather that necessary research material than playing in the WSOP? Told ya, GREAT perks here at Aces.....

Aces Casino has been coming out to the WSOP since 1982, and this reporter is proud to pass along the fact that back when dinosaurs roamed the earth, we got one of those coveted bracelets. How's THAT for research? (grin) Hey, we got hi by the deck for about an hour straight, but WHO CARES? A win's a win. But, we digress....

It's been said that, in the world of sports, it's kinda tough to get your horse into the Kentucky Derby, to get your stock car onto the track at the Daytona 500, and FORGET about playing in the NBA finals. Yep, all tough to accomplish. But, when you think about it, the WSOP is the ultimate fan sport. At the Rio every year, in June, you can come out to Vegas, plunk down your entry fee for the tournament of your choice, and find yourself playing at the same table as some of the finest poker players in the world. OK, ya gotta admit, that's pretty cool.

Besides the tourneys, the place is CRAWLING with all of your favorite players all day and night, and for those that crave the cash games and satellite Sit-&-Go's, you're in the right place. ANY game you're lookin' for, you can find. And not just at the Rio. A lot of the mega-stars hang over at the Wynn and the Bellagio during WSOP season. Can't attend? No problem: Just check out the "Poker News" section of Cardplayer.com. If it's happening in the WSOP, you'll have no problem finding what you're looking for at CardPlayer.com.

Now, it's no wonder that Aces Casino is the #1 orange county casino party company for poker, as well as all the other games. Aces has the pro dealers, and the WSOP experience that makes EVERY poker tourney FEEL like the WSOP itself. And, who knows? You might just run into someone you recognize at one of our events. It won't be Doyle, though. I think he's still bitter..... (grin)

(Ed. Note: Let it be said that there is no one more professional and purely kind to everyone than Doyle Brunson. Doyle's a true pro. He was gracious, and couldn't have cared less about getting bounced from the tourney mentioned above. He just went and bought into another one right away, and ended up winning his tenth WSOP bracelet in the process. So, in a way, we should get credit for that bracelet, right, Doyle?)
Posted by Aces Casino at 10:28 PM